John Edward Gruber, founder of the Center for Railroad Photography & Art, died on October 9, 2018, after struggling briefly with esophageal cancer. His influence on the field of railroad photography is impossible to overstate, from his own paradigm-shifting black-and-white work beginning in the 1960s to his 2018 book that reexamines the lives and photography of Lucius Beebe and Charles Clegg. Beyond his own luminous work, Gruber thoughtfully shone a spotlight on other notable photographers while also encouraging young and emerging practitioners. Classic Trains magazine dubbed him a “provocateur of railroad photography” in a 2014 profile by Kevin P. Keefe. There would be no Center without Gruber’s vision and tireless efforts, and all of us here stand always on his shoulders.

Born in 1936 in Chicago, he soon moved with his parents to their native area, settling in Prairie du Sac, Wisconsin. There as a youngster he became enthralled with both railroading and journalism, especially the craft of printing. His hometown is little more than forty-five minutes from Madison, and that’s where he went to college, receiving a degree in journalism from the University of Wisconsin. He was editor-in-chief of The Daily Cardinal student newspaper in 1957, and he went on to spend thirty-five years with the university’s publications department. He became serious about railroad photography around 1960 and was a dedicated freelancer ever since. Legendary Trains magazine editor David P. Morgan was an early champion of Gruber’s work, and the two eventually became close friends.

Gruber’s numerous books include the aforementioned Beebe & Clegg: Their Enduring Photographic Legacy with John Ryan and Mel Patrick, and the pathbreaking Railroaders: Jack Delano’s Homefront Photography, both published by the Center. Beebe & Clegg debuted in April 2018 and went into a second printing in just four months. Railroaders accompanied a landmark exhibition, conceived by Gruber and Jack Holzhueter and realized in partnership with the Chicago History Museum; the book received an award from the Railway & Locomotive Historical Society (R&LHS) and the exhibition drew nearly half-a-million visitors. (Gruber and Holzhueter had been friends since college days on the Cardinal.)

In 1994, the R&LHS conferred its lifetime achievement award for photography on Gruber. From 1995 to 1999, he was editor of the magazine Vintage Rails and later served as a contributing editor to Classic Trains. Gruber volunteered as an editor for both the R&LHS and for the Mid-Continent Railway Museum in North Freedom, Wisconsin. He chaired Mid-Continent’s photography and art committee, which led him to found the Center in 1997 along with Joel Skornicka and Ralph Pierce. Gruber then served as the Center’s president and the editor of its journal, Railroad Heritage, until 2013, and he remained on its board of directors until his death.

Under Gruber’s leadership, the Center grew to become a nationally significant arts and education nonprofit organization devoted to railroading—the only such institution in the nation. The Center’s programs serve the general public as well as the substantial community of railroad photographers on the North American continent and beyond.

Gruber’s early efforts at the Center included developing an extensive traveling exhibition and publication program focused on railroad workers with funding from the North American Railway Foundation. The Center has continued to prepare and circulate traveling exhibitions, which have appeared in railroad and art museums across the country. Venues include the Haggerty Museum of Art at Marquette University and the Grohmann Museum in Milwaukee; the California State Railroad Museum in Sacramento; and Grand Central Terminal in New York City.

To give the Center a publishing platform, Gruber launched Railroad Heritage® in 2000 and produced its first thirty-one issues. Those included two critically acclaimed special issues, Railroad History in a Nutshell and Railroad Preservation in a Nutshell, both also in collaboration with Holzhueter as well as Scott Lothes. Two Railroad Heritage articles have received the David P. Morgan Article Award from the R&LHS—the top prize for articles published on railroad history in any American publication.

Thanks to an early partnership that Gruber helped forge with the Archives and Special Collections department of Lake Forest College’s Donnelley and Lee Library with the aid of Arthur Miller and later Anne Thomason, the Center has become the nation’s go-to repository for railroad images. Its holdings include the work of several leading photographers and artists, including Wallace W. Abbey, Donald W. Furler, Victor Hand, Ted Rose, and Jim Shaughnessy. Lake Forest College also provides space for the Center’s annual “Conversations” conference, first held in 2003, again with Miller’s assistance. It has grown from a one-day event with sixty attendees to three days and capacity crowds of 180.

In 2013, the Center’s board of directors renamed the annual awards program in Gruber’s honor. He served as a judge each year through 2017 and particularly enjoyed the opportunity to promote creative work by young and aspiring photographers. Any gifts made to the Center in Gruber’s memory will go towards the John E. Gruber Creative Photography Awards Program.

Gruber is survived by his wife of fifty-six years, Bonnie Jean (née Barstow); sister Mary Lee Olson; sons Richard (husband of the former Bonnie Jean Evert) and Timothy; grandchildren Martin and Tamara; three step-grandchildren, Amy, Andrew, and Adam Yanke; four step-great-grandchildren; and five nephews. Gruber enjoyed sharing his love of railroading with his family. Richard is also a photographer and works for the Wisconsin & Southern Railroad, and John most recently accompanied his wife and grandchildren on a cross-country Amtrak trip in July 2018. Bonnie cataloged John’s substantial library of railroad literature and often edited his railroad manuscripts; she, too, had been a Cardinal editor and the two met in its offices.

Mel Patrick, longtime friend and a pathbreaking photographer himself, summarizes the feelings of so many of us at the Center with these words: “John has always been a quiet giant in our field, encouraging the new photographers as well as recognizing those who came before us. Well done, Mr. Gruber; we all stand in your shadow and are thankful for all that you have given us.”

John Gruber, founder of the Center for Railroad Photography & Art. Photograph by Henry A. Koshollek

Make a contribution in memory of John Gruber, the Center’s founder. Gifts will go towards the John E. Gruber Creative Photography Awards Program. 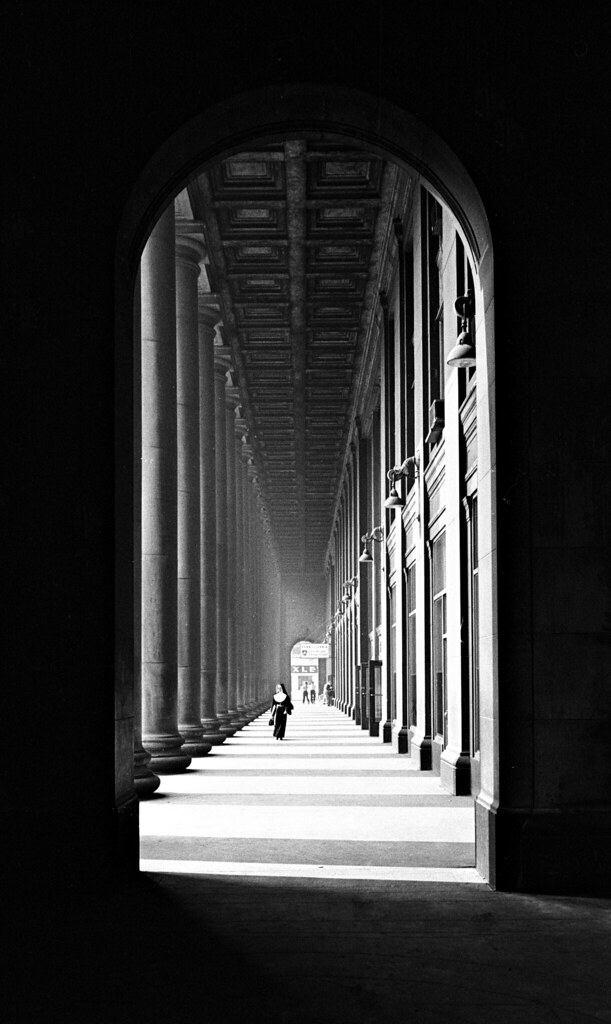 A nun walking through the massive columns outside its waiting room in 1964 gives Chicago Union Station a cathedral-like appearance in one of John Gruber’s most iconic photographs.