John Bjorklund (1939–2005) photographed railroads throughout the United States and Canada for most of his adult life. He was born in Tacoma, Washington, to Walter and Barbara Bjorklund. Walter was a Northern Pacific Division Engineer whose frequent division shifts on the railroad and engineering assignments allowed John to grow up and absorb, learn and enjoy most all of the Northern Pacific in the west. The family lived in Billings, Montana, during John’s elementary school years, and later in St. Paul, Minnesota. This exposure led to John’s love of the Northern Pacific, which carried on into the Burlington Northern, but John also had huge soft spots for the Milwaukee Road, Erie Lackawanna and nice big passenger trains, like the NP’s flagship North Coast Limited.

Following college at the University of Minnesota in St. Paul (the real U. of M., as he would say), John served two years in the Army. He was stationed at Fort Knox and engaged in psychological testing. Following his discharge in 1965, he returned to St. Paul and found employment at the Ford Motor Company. Ford soon transferred him to Detroit, where he would remain for the rest of his life. He retired in 1999, having ascended to the corporate level as a traffic analyst. His worked involved coordinating the transportation of auto body parts and finished automobiles by rail and truck. Through professional contacts, he gained many great friends on the railroads.

Besides his railroad photography, John had a great love for the opera and classical music. He put together several dissolve slide shows of railroad photographs set to classical music, finding just the right ballad or instrumental for each photo sequence. More importantly John possessed a keen memory. Friends called him “a walking hard drive” for his uncanny ability recall details, dates and locations.

When he started photography in the late 60s, there were numerous signal towers and stations still in use, which John often incorporated in his photos. He loved signals above all, and various types appeared frequently in his photos as both subjects and compositional elements. His favorites by far were semaphores or “blades” as he called them. John made it a point to cover as much as he could of disappearing aspects of railroading before they disappeared.

This interest and drive allowed John to cover a great deal of the U.S. and a good portion of Canada during his photography career. Besides traveling with most of the Detroit Tuesday Night Live group (a group of Detroit-area railroad photographers who meet on Tuesday nights to share photos), John was also a frequent photography partner with Jim Thomas, Mike Schafer, Doug Harrop, Emery Gulash, Jeff Mast, Bob Kessler and Jim Koglin. Kessler, Koglin and Bjorklund traveled together so frequently during the last 10 years of John’s life that friends dubbed them the infamous “Group of Three.” In the early 1980s John commissioned a painting by noted railroad artist Larry Fisher. Based on one of John’s photos, it shows one of his favorite locations that contained two of his favorite railroads: the Northern Pacific and the Milwaukee Road near Iris, Montana. The painting features the Milwaukee Road’s Olympian Hiawatha with electric “boxcab” no. E14 overtaking a westbound NP freight headed by Z6 “Challenger” steam locomotive no. 5117.

John is survived by his wife Rose, whom he married late in life in 1990, and brothers Drew of Minneapolis and Charles of New York. He is fondly remembered by many great friends in the Detroit area, and around the U.S. and Canada. 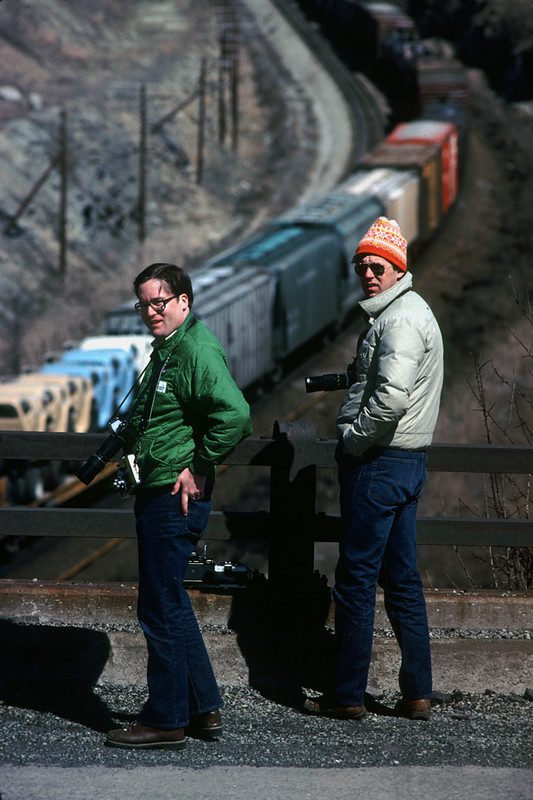