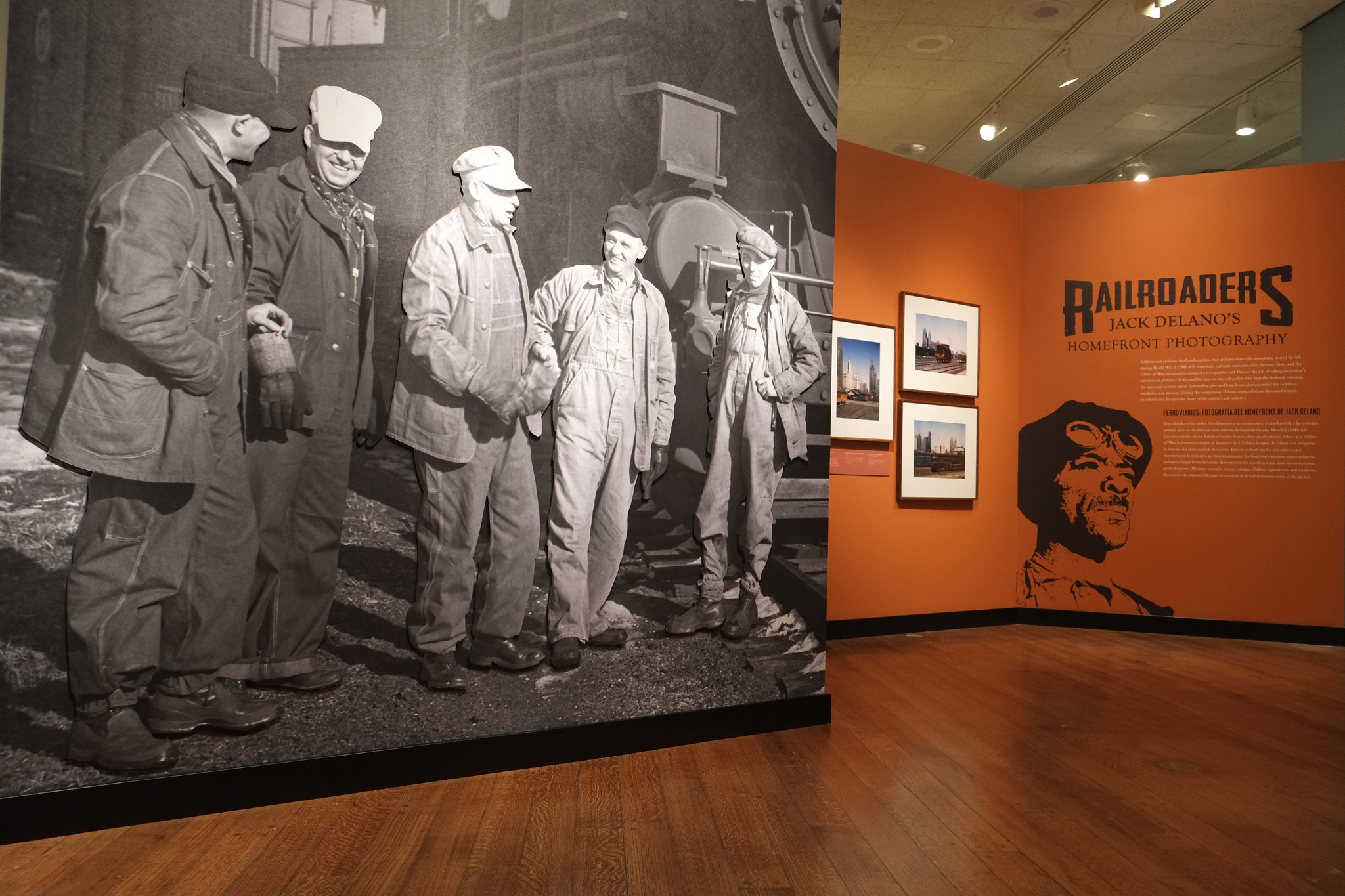 The Center’s collaborative exhibition with the Chicago History Museum opened April 5, 2014, and closed on January 3, 2016. The exhibition features some sixty of the remarkable images created in 1942–1943 by Jack Delano as part of his assignment to document the nation’s railroad story for the Farm Security Administration-Office of War Information. While Delano also photographed infrastructure and rolling stock, he concentrated on the people who did the work of railroading. Roy Stryker, head of the photographic surveys for both FSA and its successor OWI, instructed Delano to document in pictures the importance of the railroad industry during wartime and the contributions made by railroaders and their families to World War II on the home front. Delano complied. His images feature such scenes as children collecting salvaged metal for recycling into war materiel, posters in public and private places promoting the sale of war bonds, and the ubiquitous flags that honored service men and women.

Generous support of individuals and foundations alike made this project possible. Sponsors include Bon and Holly French, the North American Railway Foundation, the Union Pacific Foundation, CN, the Candelaria Fund, and David and Cynthia Kahler.

The collaboration with the Chicago History Museum (CHM) provided for more than “pictures on a wall.” The Center published a heavily illustrated catalog (200 pages, hardcover) about the photographs and the people in them. The Center hosted a special preview gathering for descendants and family members of Delano’s portrait subjects. Searching for and interviewing family members was been a time-consuming but rewarding undertaking. The exhibition also includes artifacts belonging to the portrait subjects, modern photographs of their descendants, videos, and interactive environments. Because Delano captured workers of many ethnic groups and races, Railroaders meshes with CHM’s ongoing exhibition series that features the city’s rainbow of communities. The Museum embraced the Center’s exhibition proposal wholeheartedly and we worked closely together to bring the project to life.

The existence of Delano’s 2,500-plus photographs in the FSA-OWI collection at the Library of Congress is hardly a secret. They were used in 1977 in James E. Valle’s The Iron Horse at War, a book that emphasized locomotives and operations. The Center’s project builds on his pioneering effort, and will tell the railroad story through the lives of Delano’s subjects—a human-interest, social-historical approach.

Delano (1914–1997) appears to have had a gift, tempered by luck, for selecting portrait subjects who reflect America’s and Chicago’s variety of ethnic groups and social classes. He recorded their names as well as their faces, making it possible to locate the workers’ surviving families and to use their portraits as a gateway for telling the families’ highly varied histories—and, by extension, the social history of America in general—for the era of the early 1940s to the present. For example, one of his subjects was an African American who organized a tenant farmer’s group in Arkansas. A grandson of another, Italian-American conductor Daniel Sinise, is a television celebrity who keeps his grandfather’s railroad watch under a glass dome on his mantel. In sum, in only six months (November 1942 through April 1943) Delano created perhaps the best overall portrait of railroading and its people and culture of any photographer in the United States. (Indeed, the volume of photographs may constitute the largest such project in the world.)

Railroaders: Jack Delano’s Homefront Photography, demonstrates that the railroad industry—like ethnic, religious, and neighborhood enclaves—fostered its own communities and networks that cut across ethnic and religious lines. Through the stories of the lives of the men and women of railroading, an exhibition and accompanying programs and publications will demonstrate how the people of one industrial community represent, in microcosm, the vastness of Chicago society and, by extension, American society as a whole.

Railroad Heritage is available as a membership benefit or you may purchase single copies.