Raffles: two framed, matted inkjet prints were raffled at the conference, a 16×20 of Richard Steinheimer’s “Cowboys and Little Joes” on Friday night, and a David Plowden print on Saturday.

Patrons: If you feel strongly about the conference, consider becoming a patron (use the Paypal link at left). Patrons help offset travel costs for presenters, and the 17 patrons of Conversations 2012 also provided funds for two scholarships in 2013. Patrons are recognized in the program and receive three free tickets for both print raffles. 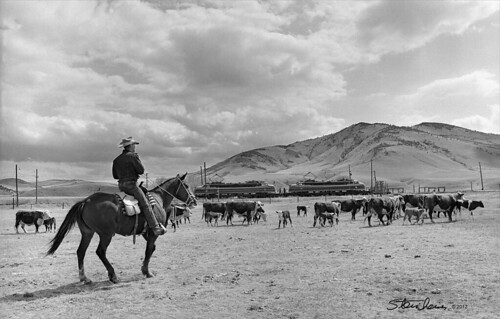 One attendee won this framed, 16×20 inch print of this Richard Steinheimer photograph, donated by Shirley Burman Steinheimer, at the Friday night dinner. The image is “Cowboys and Little Joes” at the Sappington Ranch in Montana, May 6, 1964. Click to enlarge.