“Wow, this is really exciting,” said one of the judges. With 385 images entered by ninety-six photographers residing in the U.S., Canada, and seven foreign countries, this year’s photographs were conceptually diverse, original in execution, and bountiful in quantity. “Almost impossible to pick the best of the best,” said another judge. Indeed, after choosing a total of twenty-two images for first, second, and third places, and the “Judges Also Liked” category, another judge complained that there were more than enough great images not selected to fill an entire issue of Railroad Heritage.

Matthew Malkiewicz of Mount Laurel, New Jersey, received the top award of $1,000. His “Beneath Calm Waters,” shows former McCloud River Railroad no. 25 north of Garibaldi, Oregon. He artfully took a single image of a reflection in a pool of water, reversed the image side-to-side and presented it upside down from the way it was shot—producing an exciting, much more attractive view than what he started with.

Christian Zell’s spectacular second prize ($500) view shows the fire being dropped from a steam locomotive at Germany’s DB Museum. He merged two differently exposed images to capture the differences in brightness. Zell is from Boppard, Germany.

Reflections resulted in images with ties to impressionist painting, such as the first place award as well as the third place award ($250), “Waiting for the Train Home,” by Nick King of Handforth, United Kingdom.

It was truly an interesting contest, with the strongest overall batch of material to date. Decisions proved to be more difficult than in earlier years and the debate among the judges was stimulating. The diversity was striking—no two images were alike and all would appeal to the general public.

Nineteen photographs were picked for the judges also liked category (with a free, one-year Center membership). These and the top winners will be displayed in an exhibition at California State Railroad Museum in Sacramento, in Railfan & Railroad magazine, and in the Winter 2016 issue of Railroad Heritage, the Center’s quarterly journal.

More than ever, the 2015 award program recognized the strong work of international photographers. The second and third place winners are from Germany and the United Kingdom, respectively, while three of the photographs from the “also liked” category come from Australia. 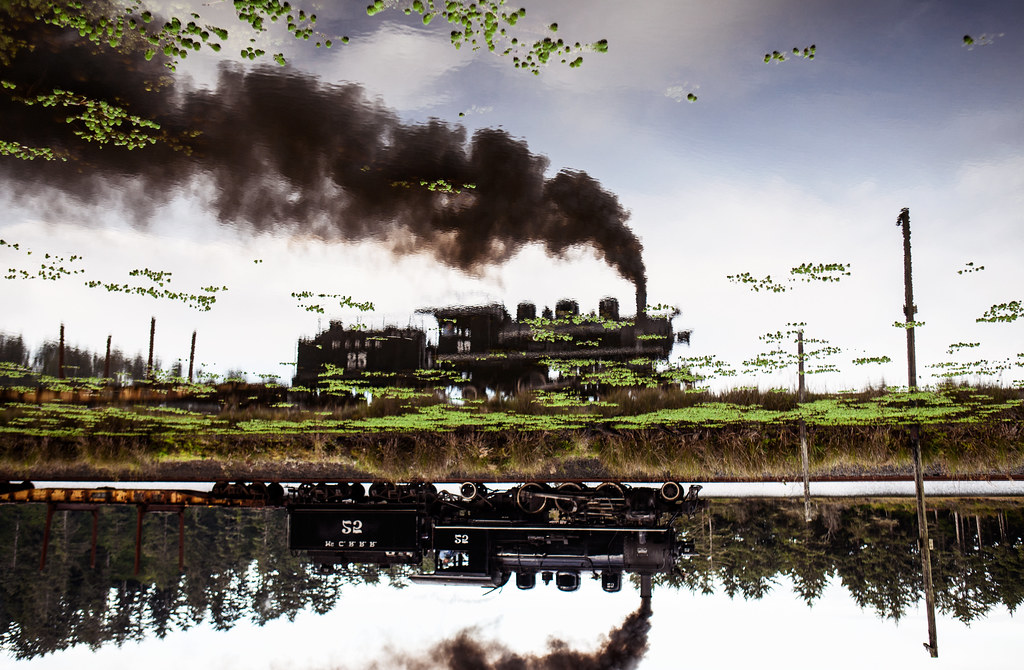 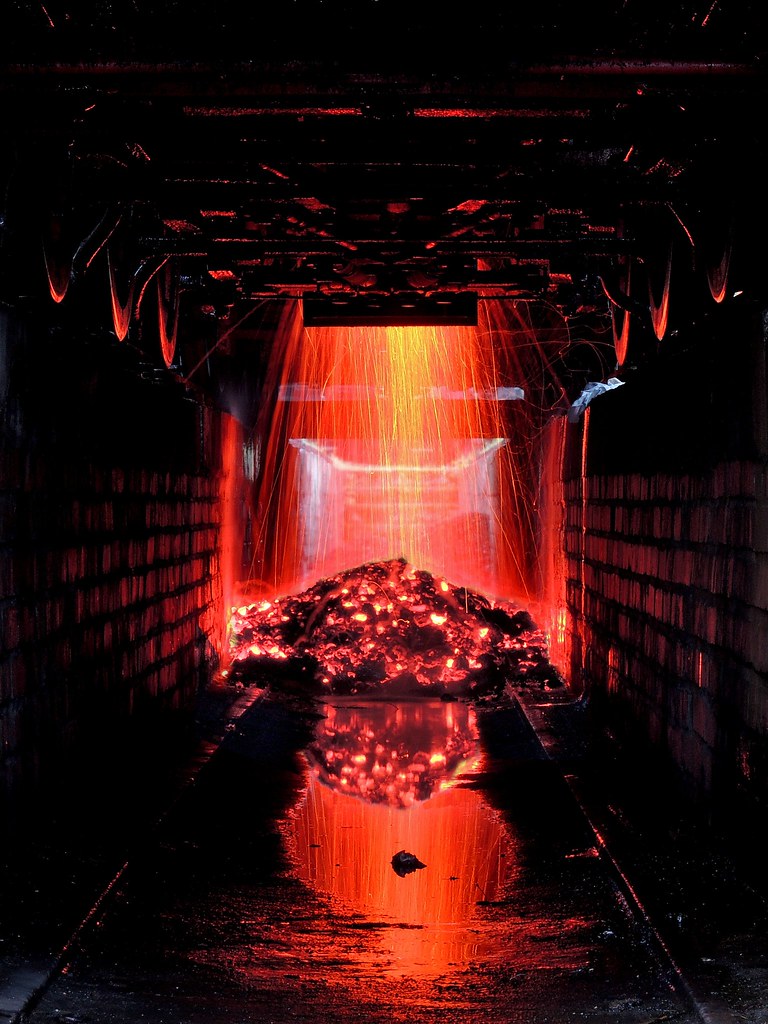 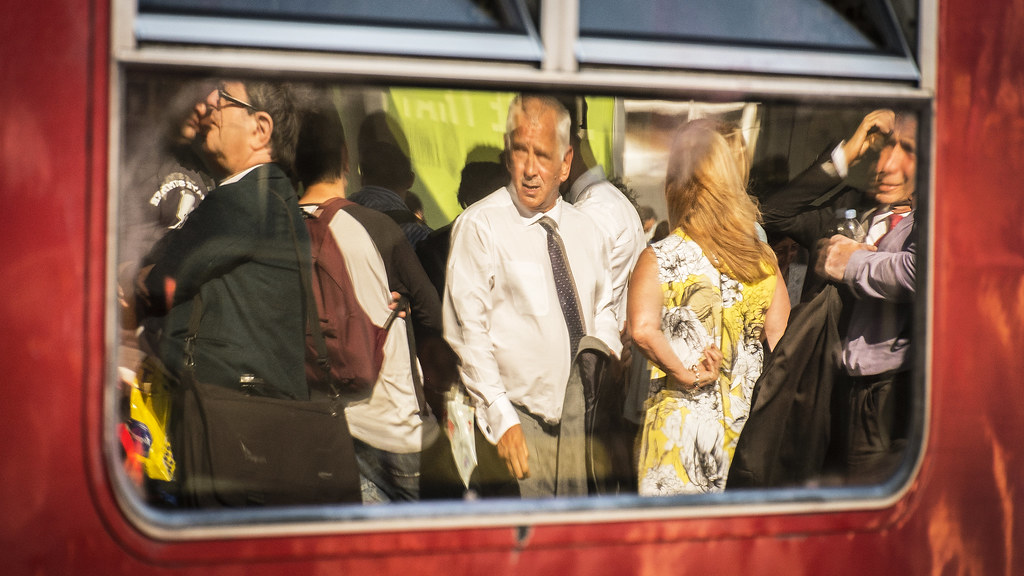 Judges’ Comments
“Beneath Calm Waters” shows former McCloud River Railroad 2-6-2 steam locomotive no. 25 north of Garibaldi, Oregon, on the Oregon Coast Scenic Railroad during a Lerro Productions charter trip on October 16, 2014. The photographer artfully took a single image of a reflection in a pool of water, reversed the image side-to-side and presented it upside down from the way it was shot—producing an exciting, much more attractive view than what he started with.

About the Photographer
Matthew Malkiewicz resides in Mount Laurel, New Jersey, where he is the senior designer for an instrumentation/electrical/process control engineering firm. Born in New Jersey, he has also lived in California and Colorado, which ignited the drive to travel and capture the country’s modern-day tourist steam operations. Vacations are now planned around and spent photographing special railroad related events, private train photo charters, and historical places.

Malkiewicz’s fascination with trains started at the age of four months by watching a toy train run around the Christmas tree; he has been hooked ever since. Completely self-taught—first with 35mm and medium format film and more recently digital cameras and Photoshop—creating timeless images has become a passionate hobby. Early influences include Don Ball, Jack Delano, and Mallory Hope Ferrell; lately Zack Arias. Matthew was the third prize B&W winner in the Center’s 2012 Awards Program, and he has recently been featured on the CNN International, Weather Channel, DPReview and SLR Lounge websites, and published in Trains and Shutterbug magazines.

His entire portfolio can be viewed at: “Lost Tracks of Time.”

Judges’ Comments
Fire being dropped from steam locomotive 01 118–a 4-6-2 of the DRG class 01–after a long day of work at Germany’s DB Museum in Koblenz-Lützel on April 27, 2013. The photographer merged two differently exposed images to capture the differences in brightness.

Born in August 1993, Christian Zell is a college student currently residing in Boppard, Germany, on the Rhine River. He grew up traveling by train and began photographing seriously in 2011, when he moved next to one of the world’s most beautiful and famous railway lines, the Left Rhine line. In addition to photography, he is also active in two railway museums.

Judges’ Comments
Reflections resulted in images with ties to impressionist painting, including third place award, “Waiting for the Train Home,” by Nick King. The photograph, made on July 22, 2015, is part of King’s series, “Evening Rush at Clapham Junction,” depicting the bustle of the commuter rush hour at one of England’s busiest stations.

Numbering “Engine Smiths,” and a Westinghouse Chief Draftsman amongst his ancestors, it wasn’t surprising that Nick King—of Handforth, United Kingdom—grew up with a passion for steam and an interest in all things railway. A career in retail buying control and product development however, precluded development of his skills at the easle and with a camera until retirement, when a three-year course and a very patient wife saw him gain a first class honours degree in contemporary documentary photography. “The railway never leaves you,” says Nick,” and it’s never too late to start over!”