When I first went through the entries, I was stunned at how many great, great photos there are. Selecting the winners was agonizing and challenging. I looked for photos that Stein liked taking—especially crummy weather, landscapes and night shots using time exposures and moonlight, along with people—as just some of the elements. Dick said, “Creativity began in his darkroom, pushing the button was the easy part.” His influence was as both a creative photographer and a documentary photographer, but for this contest, I wanted to see the creative side of the individuals who entered.

About the 2012 Awards Program

With a big surge just before the deadline on December 31, the total number of entrants was up more than 50 percent over last year. With so much creativity presented among the entries, Burman and Center staff decided to create separate categories for color and black & white in order to honor more photographers. We send our thanks to all who entered; please know that each one of you made the selection process very, very difficult. The selected photos will be exhibited at the California State Railroad Museum and published in the Center’s journal and Railfan & Railroad magazine.

The theme was “Railroading, inspired by Steinheimer.” Canon again co-sponsored the awards program by providing a PIXMA Pro9000 inkjet printer as one of the prizes.

The theme honors legendary photographer Richard Steinheimer, who passed away on May 4, 2011, leaving a legacy that touches nearly every practicing railroad photographer in the U.S. and much of the world, either directly or indirectly.

You can see selections of both Steinheimer’s work and Burman’s work on railroadheritage.org, and we encourage you to spend some time with Steinheimer’s books, such as Passion for Trains, Done Honest & True, and Backwoods Railroads of the West. 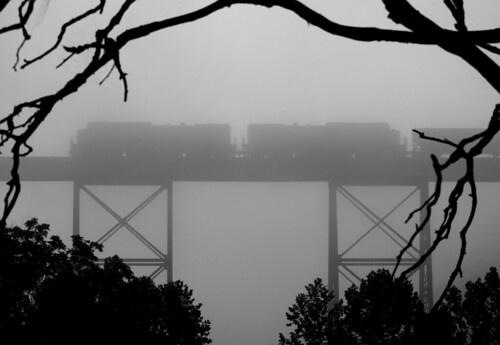 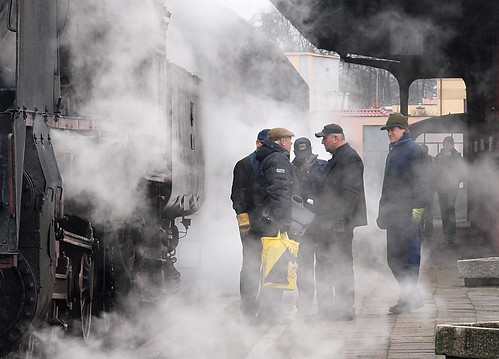 First prize in the color category went to Robert Day 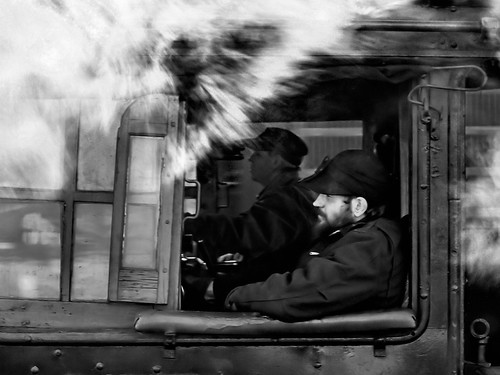 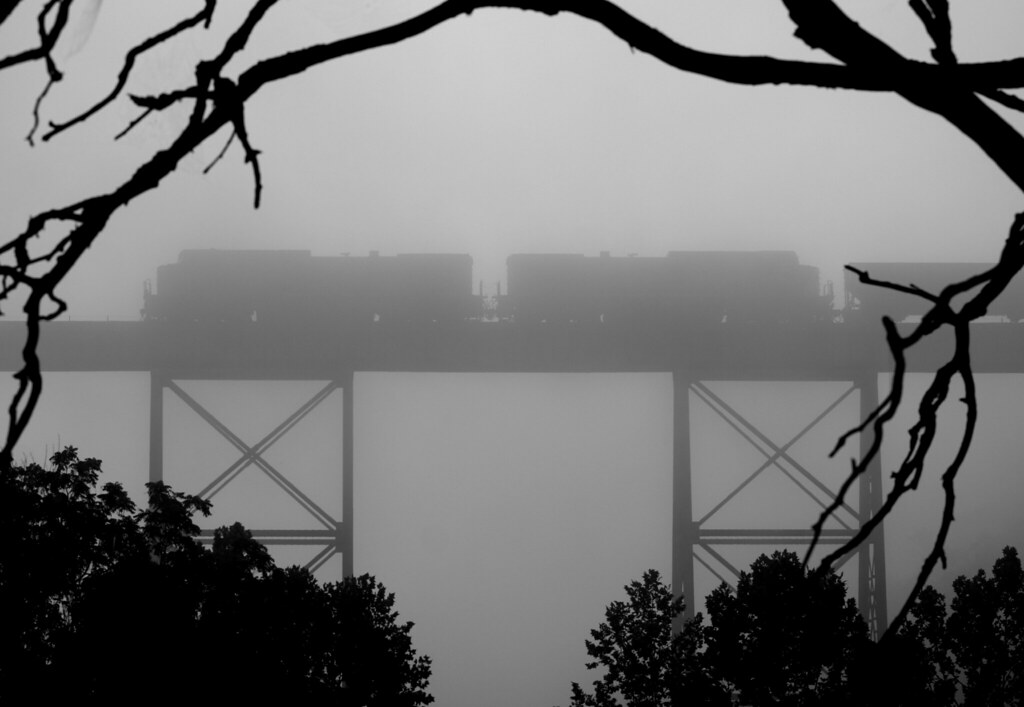 Judge’s Comment:
This image immediately caught my eye when I first looked at all the submissions together on my computer screen. The composition of the fog enveloping the train and trestle, and using tree branches to frame the scene made this the Grand Prize winner. Dick loved photographing in fog and I know he would have picked this image too.

About the Photographer:
Chris Starnes lives in Gate City, Virginia, where he works as a Transportation Planning Manager for the LENOWISCO Planning District, a regional planning and economic development agency located in Southwest Virginia. On the weekends he is a shortline railroad engineer on the Gulf & Ohio’s Knoxville & Holston River Railroad / Three Rivers Rambler in Knoxville, Tennessee. Additional, Chris is a co-founder in the popular RailPictures.Net website, founded along with Chris Kilroy in late 2002.

Chris developed an interest in trains at a young age thanks to his father being a model railroader and railfan. He began casually photographing trains around age 14 and became more serious after graduating high school in 2001. After a few years of shooting prints and slides he switched to digital in 2002. He was the first photographer to have a digital image published on the cover of Railfan & Railroad magazine (May 2004), quite a step forward in the early stages of digital imaging in the railroad photography community. Chris utilizes Canon equipment and currently shoots with a 7D body. He credits veteran railroad photographers such as Ron Flanary and David DeVault as early influences. You can see more of his work on railpictures.net, as well as on his homepage, starnesphoto.com. Judge’s Comment:
This one is so much like a setting Dick would have loved with lots of railroad workers. The one on the right is smiling at the visitor carrying a yellow bag with a Scotty dog picuture on it and a briefcase. I can almost imagine the interaction between the gentleman and the crew. The billowing steam encases the men and makes them show up. If the steam wasn’t there, the men would have blended into the side of the locomotive and not have the impact that it does here.

About the Photographer:
Robert Day was born in 1957, the son of a railwayman. He trained as a librarian, but then worked in a number of positions in industry and the UK Civil Service until 2010, when he decided that if he didn’t try making a living from photography now, he never would. A year later, with no work coming in, he went back onto the job market and is currently working in freight auditing, where his knowledge of railways is very useful!

Day started taking photographs seriously in 1971, when his father decided that it was time to start recording the changing British railway scene before the “traditional” railway was swept away by modernisation or closure. Robert is currently working on a book of his UK railway architecture photographs taken at that time, for publication in 2013. He also produced his first photobook last year, The Soul of the Machine: 2011. Robert was the first ever winner of the International Labour Photographer of the Year competition in 2008, and his work has also been included in the UK Rail Photo Library, part of the agency Milepost 92½, founded by the British railway photographer Colin Garratt. Judge’s Comment:
This was also an immediate pick due to the overall composition and the fireman’s face. The bill of his hat and nose comprise an interesting, matching curve along with his cool, steady gaze. The blasts of steam give the scene motion, while the crew appears motionless. The photo is suggestive of Dick’s fondness for shooting cab crews.

About the Photograher:
Most of my professional life has been devoted to designing and implementing marine/aviation navigation systems. Though I’m a scientist/engineer/inventor by training, I’ve loved photographing/developing/printing (now Photoshopping of course) since I was 10 years old. The power and majesty of the railroad system, built from both humans and steel, has a sharp resonance of spirit with me. I find that time spent watching trains, or rail maintenance operations, is good for my soul. Judge’s Comment:
I chose this for two reasons. First, Southern Pacific was Dick’s railroad and had stickers on his camera cases and van bumper sticker that said “I Love SP.” Even though SP is gone and some other railroad desecrated the loco by covering over the SP number under the cab window with an ugly patch. Second, it’s the composition and imagination to see this view that stands out. The photographer bent over, spotted interesting framing, and did this shot. Dick too crawled, crouched or climbed a pole looking for the perfect angle—he seldom did a standup view when he was being creative.

About the Photographer:
Todd is a practicing architect who combines a life-long fascination with trains and the design of buildings within the built and natural environment. He began to photograph railroads in 2011, probing the relationships of structure, materials, composition and form, and their intimate relationship to sunlight, daylight and darkness. Todd’s work takes him around the world, and he is currently photographing throughout North America, Europe, the Middle East, Asia and points between. Judge’s Comment:
Everything came together here as the angles of the train and snow covered sidewalk with foot tracks draw the viewer right into the scene. The streaks of light falling across the snow break up the scene from being too grey and illuminate people in motion. The light from the opened door on the face of the conductor makes this a perfect scene, and the photo could have been a first place winner.

About the Photographer:
Eric Williams lives in Mlllburn, New Jersey, trained in industrial design, and works in Manhattan as a creative director. Born in Illinois, he moved frequently as his father was in the Air Force, which exposed him to a wide range of regions and railroads. These experiences instilled love of travel and history, and he tries to put regional context into his images.

Williams has had a lifelong love for trains and railroading, and he began photographing them at age 15. High school photography classes helped hone his skills, and he shot primarily black-and-white film until the digital revolution. Early influences included Steinheimer and Ted Benson. Williams was the grand prize winner in the 2011 Railfan & Railroad Centerspread Competition, and he received an honorable mention in 2010. He also received second prize in the Trains Photo competitions of 1997 and 1998, and a runner-up award in the 2009 contest. Judge’s Comment:
As most entrants knew, Dick photographed trains in scenic settings, where the train was not dominant. In this photo, all the different elements of an interesting scenic view are present. The slight gold tones of the dry weeds in the foreground are a perfect anchor for the bottom of the photo with the red locomotive and lights approaching. The rest of the freight cars blend in with grey tones of the trees in the background. The softness of the layers of trees in neutral grays worked perfectly with the red engine.

About the Photographer:
Ken Kraemer has been photographing trains since he was about 10 years old in the early 1950s. He has just completed his latest book, Focused on Steam: Fifty Years of Steam Locomotive Photography, and he has also published several other books featuring his railroad photography. He has also had numerous photos and articles published in railroad-oriented publications, as well as other non-railroad magazines and books. Kraemer was employed at a professional photo lab and camera store before working for the Delaware & Hudson Railroad for 23 years until his retirement. When Canadian Pacific acquired the D&H in 1991, he served on the Editorial Advisory Committee of CP RAIL NEWS, the company newsletter, and also as an editor of the Bridge Line Division (D&H) employee newsletter. Judge’s Comment:
A picture postcard scene, perfect framing, dark trees in the foreground, the train steaming across the center, and the snow-covered mountains dominating the background. The photograph portrays a beautiful winter scene that happens to have a train in it, but is not dominated by it. A favorite Steinheimer setting, where the train is miniscule.

About the Photographer
Matthew Malkiewicz resides in Mount Laurel, New Jersey, where he is the senior designer for an instrumentation/electrical/process control engineering firm. Born in New Jersey, he has also lived in California and Colorado, which ignited the drive to travel and capture the country’s modern-day tourist steam operations. Vacations are now planned around and spent photographing special railroad related events, private train photo charters, and historical places.

Malkiewicz’s fascination with trains started at the age of four months by watching a toy train run around the Christmas tree; he has been hooked ever since. Completely self-taught—first with 35mm and medium format film and more recently digital cameras and Photoshop—creating timeless images has become a passionate hobby. Early influences include Don Ball, Jack Delano, and Mallory Hope Ferrell; lately Zack Arias. Matthew has recently been featured on the CNN International, Weather Channel, DPReview and SLR Lounge websites, and published in Trains and Shutterbug magazines.

His entire portfolio can be viewed at: “Lost Tracks of Time.”