With dramatic images and sweeping promotional strategies, Lucius Beebe—joined in 1941 by his life partner Charles Clegg—introduced railroad photography and the world of railroading to wide popular audiences. Their pioneering efforts established a broad market and wide appreciation for rail photography, leading to its far-reaching appeal in print today. The exhibition Beebe & Clegg: Their Enduring Photographic Legacy has been assembled by the Center for Railroad Photography from source material of the book of the same title (The Center for Railroad Photography & Art, 2018), and is newly presented in this online format.

Lucius Beebe (left) and Charles Clegg pose along the tracks of the Southern Pacific narrow gauge in the Owens Valley of California. Their pioneering efforts established a broad market and wide appreciation for rail photography. Beebe’s 4×5-inch Graflex Model B with an adapter for a film pack rests on the ground next to him, while Clegg holds his original Kodak Medalist with a black lens barrel. Clegg made the photo using a self-timer and tripod. It appeared on the dust jacket of Mixed Train Daily. Photograph by Charles Clegg (by timer). California State Railroad Museum, BC3411.

In the late 1980s, David Kahler was deeply inspired by seeing an exhibition of O. Winston Link photographs. He soon began making annual trips to the West Virginia and eastern Kentucky coalfields, destinations that strongly resonated with his own aesthetic of “place.” Armed with a used Leica M6 and gritty Tri-X film, he and his wife made six week-long trips in the dead of winter to photograph trains along the Pocahontas Division of the Norfolk Southern Railway. A selection of photographs from that body of work form the core of this presentation.

David Kahler, FAIA, was born in Harrisburg, Pennsylvania. He received his Bachelor of Architecture degree from Syracuse University and a Masters of Arts degree in Architecture from Princeton University. He had a private architectural practice based in Milwaukee, Wisconsin, for thirty-six years, raised four children, and was the President of the Milwaukee Art Museum from 1974 to ’76. Kahler presently serves as a board member for the Center for Railroad Photography & Art.

This event is free.

Join the Center for Railroad Photography & Art and the Colorado Railroad Museum as we immerse ourselves in a discussion focusing on the photography and art of Ted Rose.
This virtual program is presented in conjunction with the Museum’s current exhibit from the Center, Railroads and the American Industrial Landscape: Ted Rose Paintings and Photographs, which runs now through December 31st.
Presentations by Paul Hammond, Executive Director of the Colorado Railroad Museum, and Charles Albi, former Executive Director, will explore connections between the Colorado Railroad Museum and Ted Rose. Scott Lothes, Executive Director of the Center for Railroad Photography & Art, will provide the keynote presentation for the evening concentrating on Ted Rose and his artistic legacy in the railroading community.
This event is free.
Born in Milwaukee, Wisconsin, Ted Rose attended the University of Illinois at Urbana-Champaign and worked in the art department of the Kalmbach Publishing Company. After service in Vietnam, he moved to the Southwest and eventually settled in Santa Fe, New Mexico, where he built a career first as a commercial illustrator and then as an artist. When Rose returned to painting railroad subjects around 1980, he did so with a vengeance, producing some 1,000 watercolors in a little more than two decades. Cancer claimed him too soon, but he continued painting into the final months of his life.
Rose leaves a profound visual legacy. His wife, Polly, donated his photography to the Center for Railroad Photography & Art, whose collections staff digitized and cataloged all of his 4,400 negatives.
Railroads and the American Industrial Landscape: Ted Rose Paintings and Photographs, on display at the Colorado Railroad Museum, February 3 – December 31, 2020
The railroad is a central American icon and has inspired some of the most important artists of the 19th and 20th centuries, including Ted Rose. Rose created stunning, mostly black-and-white photographs of American Industrial settings in the 20th century. The Center for Railroad Photography & Art (www.railphoto-art.org) and the Colorado Railroad Museum have collaborated to present this exhibition, which features the artist’s photographs, along with selected watercolor paintings and other works.

Join author John Kelly on Tuesday, October 6 for a virtual Oktoberfest! Crack open your favorite seasonal Octoberfest and join us for a lecture on the history of the Milwaukee Road’s beer line.
Since statehood, beer has played an integral role in the growth of Wisconsin industry, while bringing Milwaukee national fame. What might be less obvious, but no less important, was the profound role that rail transportation played in this story. This lecture will look at the rise, fall, and rise again of Milwaukee’s beer industry through the eyes of the Milwaukee Road’s Beer Line.
This event is free.
Share your favorite Octoberfest with us during the presentation on Twitter @railphotoart
John Kelly grew up in Eau Claire, Wisconsin and fostered an interest for railroads since a young age. As a teenager he enjoyed watching Chicago & North Western, Milwaukee Road, and Soo Line trains, which all passed though his hometown. His interest in railroad history stuck with him all his life, leading him to write articles for Trains magazine, Trains.com, and Vintage Rails, as well as author several books, including Streamliners to the Twin Cities, Interurban Trains to Chicago, Chicago Stations, Trains to Victory—American Railroads in World War II, and Railroads of Milwaukee.

Milwaukee Road switch engine at the Schlitz Brewery in the 1950s. Photograph by Wallace W. Abbey, collection of the Center for Railroad Photography & Art, Abbey-01-084-02.
Despite the challenges of the Covid-19 pandemic, our creative spirit is alive and well. In late June, we sent out a call for submissions to our members, asking how you were faring during this time. More than seventy of you responded by sending us nearly 200 images from around the world, along with heartfelt descriptions of your time so far.

We expanded the fall 2020 issue of Railroad Heritage to an all-time high of eighty-four pages, dedicating forty-eight of those pages to sharing your submissions. Even then, we ran out of room, and so we also created a web gallery for additional content.

To see the results, you can browse our web gallery and order a copy of the magazine if you do not already have one. To everyone who submitted work for our consideration, all of us at the Center send you our great thanks. It has been a privilege and an inspiration to see your works and read your words. 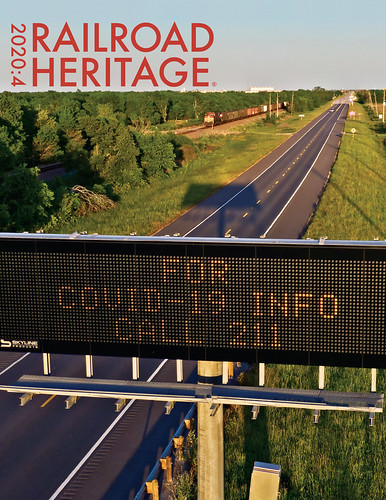