Eric Williams, of Millburn, New Jersey, has won first prize in the Center’s 2014 John E. Gruber Creative Photography Awards Program, for a stunning night view of the Chicago elevated. Matthew Malkiewicz, Mount Laurel, New Jersey, received second place for a holiday card-like photograph of a steam train in the snow; third went to Dennis Livesey, New York City, for three images representing the fascination of the city. Nineteen additional photographs were recognized in the “Judges Also Liked” category. The theme was “Lasting Impressions.” See all of the selected photographs and read the judges’ comments on the awards pages. 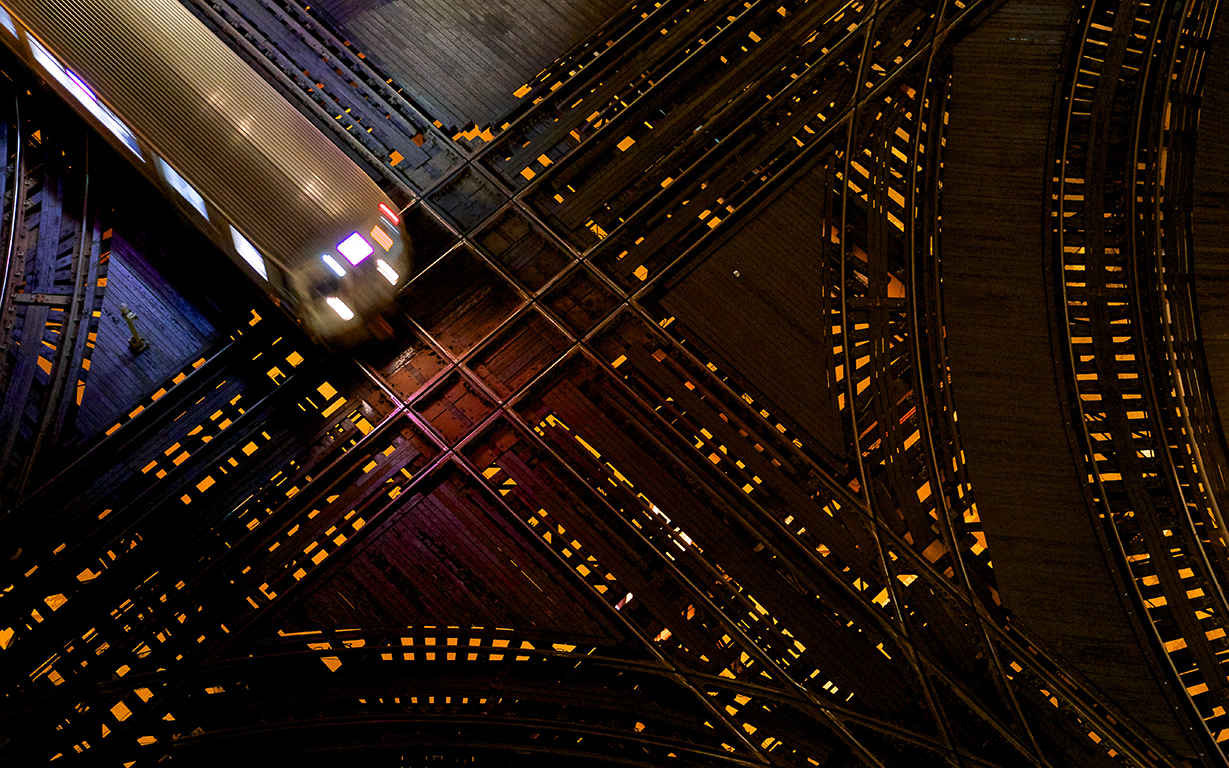 The fall issue of Railroad Heritage is now available for purchase through our online book store. Examining the future of railroad photography, writer David Lester answers the question of whether the younger generation is losing interest in railroad photography with, “Not a chance.” Lester interviews six photographers ranging in age from 18 to 30 in his cover feature, which assesses their interests and priorities, and displays the great passion they bring to the field. Incidentally, the cover photograph by Amanda Oakes is only the second time the work of a woman photographer has been featured on the cover of Railroad Heritage. Shirley Burman was the first. In conjunction with the 2014 annual meeting of the Lexington Group in Transportation History in St. Louis, there is an eight-page gallery of St. Louis railroad photographs by Center member Dick Neumiller, highlighting the Gateway City’s colorful railroads and especially its pre-Amtrak passenger trains. Three short features round out the issue. As part of our ongoing coverage of railroads and World War II in conjunction with our Railroaders exhibition at the Chicago History Museum, Center editorial consultant Jack Holzhueter shares his reflections on the patriotic imagery found in wartime dining car menus, which come from the collection of member John Kelly. Artist Elaine Wilson describes her project Charting the Wolverine of watercolors and maps highlighting Amtrak’s route across Michigan. Finally, as a follow-up to the spring issue profile on photographer Blair Kooistra, one of his former traveling and photography companions, Scott Bontz, shares his memories and photographs of their time together. Bontz has been never considered himself a railfan, and he brings an interesting perspective of an “outsider” to the pursuit of railroad photography.

In the cover photograph for the Fall 2014 issue of Railroad Heritage, six locomotives lead New York, Susquehanna & Western train BH-1 through Whitney Point, New York, on the way to Syracuse at sunrise on October 12, 2013. Photograph by Amanda Oakes.
Academy Award nominee Gary Sinise, former star of television’s CSI, visited Railroaders: Jack Delano’s Homefront Photography, the Center’s collaborative exhibition with the Chicago History Museum, earlier this spring. Sinise is standing next to an image of his grandfather, Indiana Harbor Belt (IHB) conductor Daniel Sinise. As part of photographer Jack Delano’s 1942–1943 assignment to document the nation’s railroads, the Sinise family was selected for extensive coverage as the “All-American railroad family.” Daniel appears at far left in the exhibition’s entry graphic, which depicts his five-man crew on the IHB in Riverdale, Illinois, on a February day in 1943. Learn more about the exhibit or purchase the 200-page, hardbound catalog. 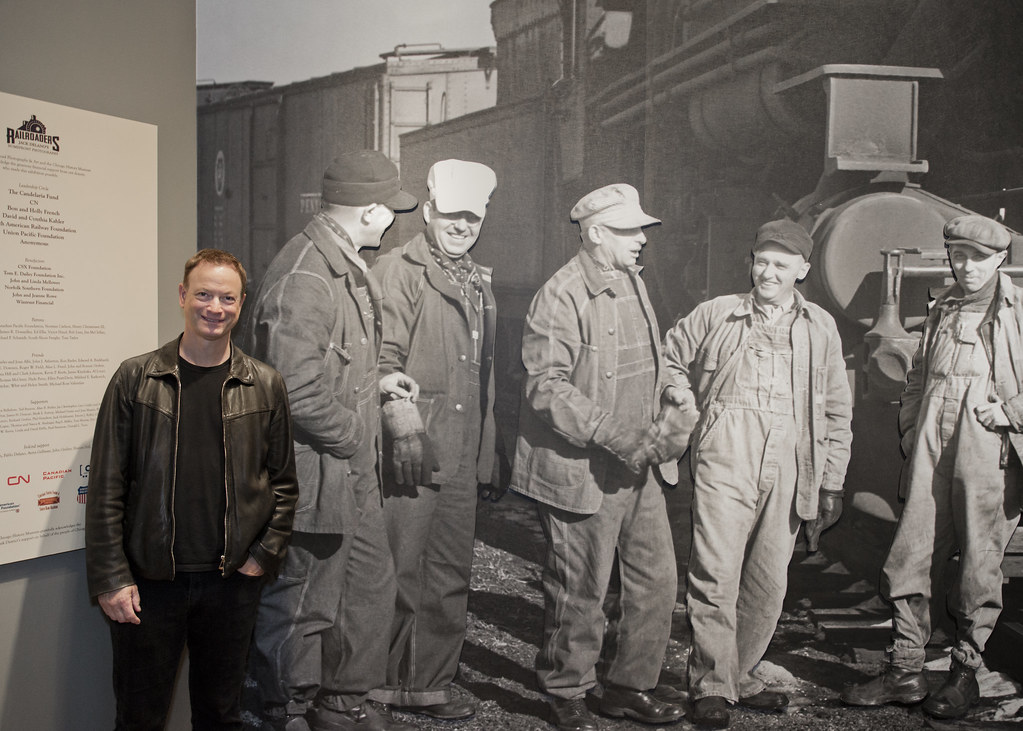 Academy Award nominee Gary Sinise poses next to the photograph of his grandfather, Indiana Harbor Belt conductor Daniel Sinise, at the entrance to Railroaders: Jack Delano’s Homefront Photography at the Chicago History Museum. Photograph by Joseph Aaron Campbell and courtesy of the Chicago History Museum.
In the twelve years the Center has offered Conversations about Photography, it has grown from one day to three. And now, in 2014, it has posted attendance records for the third year in a row. The event has become the one of most important in the world for railroad photographers, and advance registration has become a necessity. So make plans now to attend the 2015 Conversations, April 10-12 at Lake Forest College, whose campus on Lake Michigan is a treat in spring weather. Comments about the 2014 event were overwhelmingly positive. Presentations, arrangements, and a terrific Sunday morning at the Chicago History Museum for a tour of Railroaders—all received bravos. Take a look at the visual record courtesy of photographer Henry A. Koshollek. 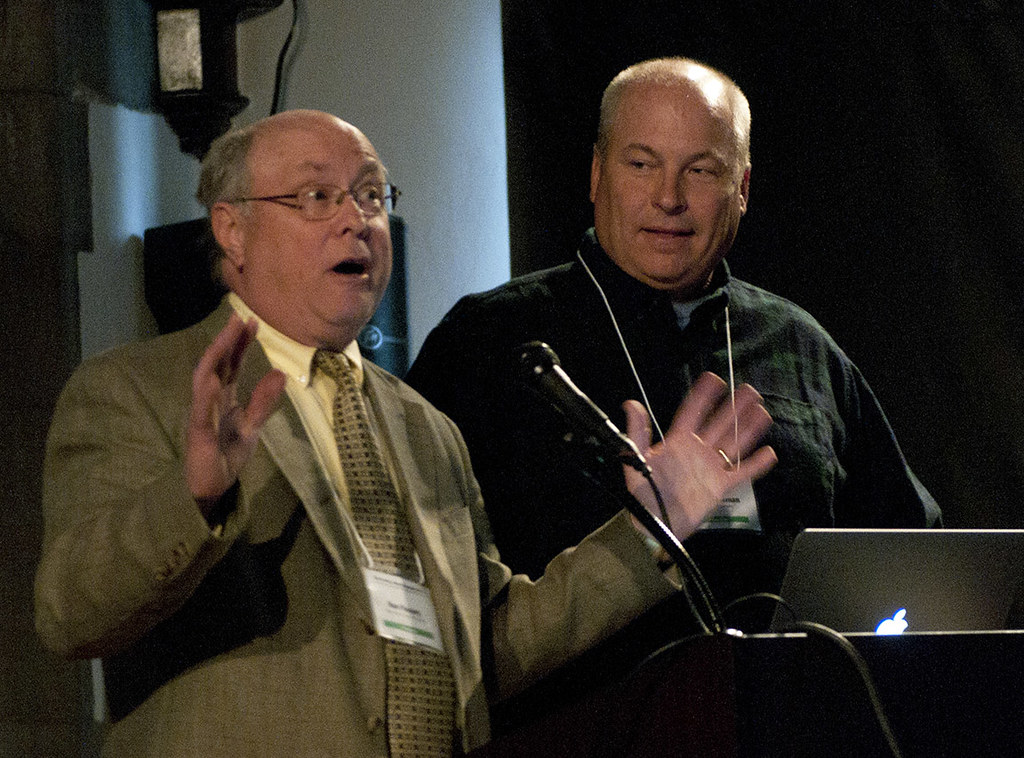 Ron Flanary (left) and Mike Danneman entertained and enlightened with their discussion of railroad photography and painting at Conversations 2014. Photograph by Henry A. Koshollek.