Get ready for our annual Conversations conference with the Spring 2016 issue of Railroad Heritage. Author, photographer, and board member Jeff Brouws provides a preview of one of the conference presentations with his in-depth look at the photography of Ronald C. Hill. We then travel across the pond to Europe where Arjen den Boers of the Netherlands introduces railway posters from central Europe in the early twentieth century. Davidson Ward offers a brief glimpse into the world of digital colorization of old photographs, while editor Scott Lothes shares some industrial archaeology from New York’s Hudson River Valley. Jordan Radke continues his popular “Out of the Archives” column with a look at processing work and guidelines for submitting your collection for consideration to the Center or another archive. And we gratefully list our donors from 2015, the people who make the Center happen. 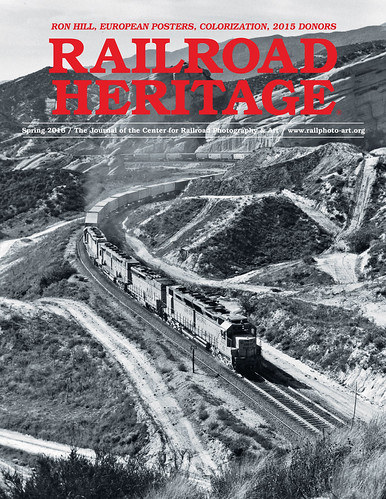 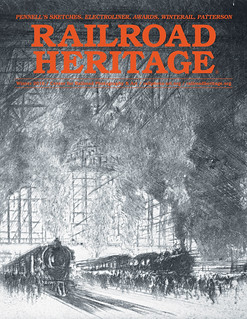 The Winter 2016 issue of Railroad Heritage boasts sixty pages of content, including five feature articles. Professor Betsy Fahlman examines the remarkable 1919 series of railroad etchings by artist Joseph Pennell. Kevin Keefe profiles photographer, writer, retired railroader, and 2016 conference presenter Steve Patterson. Elrond Lawrence looks at the thirty-seven-year history of the Winterail railroad photography show and its lasting influences. We announce the winners of the 2015 John E. Gruber Creative Photography Award, and Gruber also presents the art of the North Shore’s popular Electroliner trains. The new “Out of the Archives” column continues with its second installment by looking at scanning and digital files. 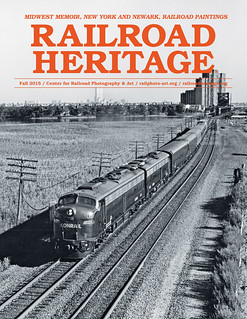 The Fall 2015 issue of Railroad Heritage includes three main features, plus a new column. Photographer Victor Hand shares a gallery of his work from around New York City. There’s a memoir and photographs by Charles McCreary about growing up around trains in the Upper Midwest. Peter Mosse recasts his 2015 Conversations presentations with an in-depth look at the first hundred years of rail art, drawing from his extensive collection. To keep you better apprised of our archiving work, we launched a new column with this issue, “Out of the Archives.” The first installment looks at organization and metadata from the work of our two summer interns in Madison.

This issue is out of print. Get in touch with us about digital copies. 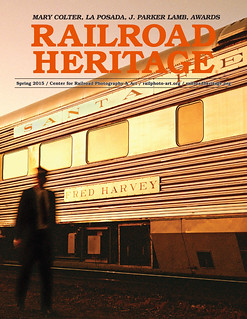 Examining the future of railroad photography, writer David Lester answers the question of whether the younger generation is losing interest in railroad photography with, “Not a chance.” Lester interviews six photographers ranging in age from 18 to 30 in his cover feature, which assesses their interests and priorities, and displays the great passion they bring to the field. Incidentally, the cover photograph by Amanda Oakes is only the second time the work of a woman photographer has been featured on the cover of Railroad Heritage. Shirley Burman was the first. In conjunction with the 2014 annual meeting of the Lexington Group in Transportation History in St. Louis, there is an eight-page gallery of St. Louis railroad photographs by Center member Dick Neumiller, highlighting the Gateway City’s colorful railroads and especially its pre-Amtrak passenger trains. Three short features round out the issue. As part of our ongoing coverage of railroads and World War II in conjunction with our Railroaders exhibition at the Chicago History Museum, Center editorial consultant Jack Holzhueter shares his reflections on the patriotic imagery found in wartime dining car menus, which come from the collection of member John Kelly. Artist Elaine Wilson describes her project Charting the Wolverine of watercolors and maps highlighting Amtrak’s route across Michigan. Finally, as a follow-up to the spring issue profile on photographer Blair Kooistra, one of his former traveling and photography companions, Scott Bontz, shares his memories and photographs of their time together. Bontz has been never considered himself a railfan, and he brings an interesting perspective of an “outsider” to the pursuit of railroad photography.